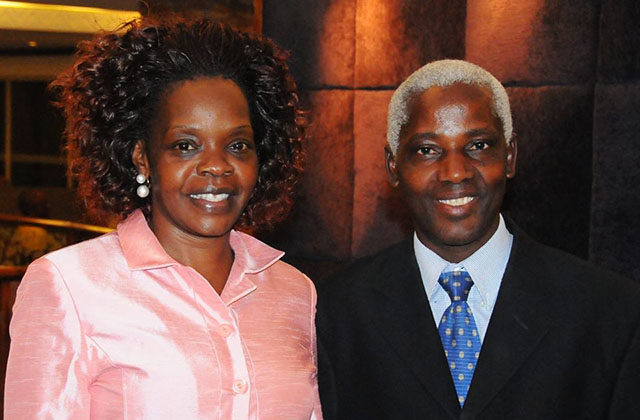 Lead Pastor of Entebbe Miracle Centre Church, Aaron Mutebi and his wife, Justine Mutebi are set to celebrate their 30th marriage anniversary this July. The couple tied the knot on 22nd July 1989, and today, they have 7 children, two daughters and five sons. Throughout their marriage, they have both witnessed how God is faithful to do what He

The couple tied the knot on 22nd July 1989, and today, they have 7 children, two daughters and five sons.

Throughout their marriage, they have both witnessed how God is faithful to do what He promises.

“God has been so good. He has faithfully led us through the marriage journey,” Pastor Aaron Mutebi said on June 5 as he announced intentions to renew his wedding vows in celebration of the 30 years in marriage on 20th July, 2019.

“My husband has taken good care of me, I am getting younger each day,” Justine said on her part.

“She is as I met her 30 years ago. God has given us love and enabled us to protect each other. He has given us Children, and grand children,” Pastor Aaron said.

Adding: “We want to encourage married couples – You have to determine and stay with your partner. A marriage is based on love.”

Mrs Mutebi said in celebration of their land mark achievement in marriage, there are so many people she is grateful for who have supported them, prayed for them and encouraged them.

30 years ago has been a long way, Pastor Mutebi noted, further revealing that putting God at the center of his marriage, enabled him to enlist His help to love.

Apostle John Bunjo of Christian restoration Ministries International took to social media to encourage and congratulate the couple. He said; keep going, you are a good example amidst marital challenges even among the clergy.

Who is Pastor Aaron Mutebi?

Pastor Aaron Mutebi came to know the Lord as his personal savior and Lord on 16th August 1986. The same year he joined a local Bible school in the city of Kampala, Uganda, to learn more about God and the Bible.

His childhood was mired in hardships in that he sold news papers like Munno, Taifa Empya, Weekly Topic, Munnansi, Ngabo, Voice of Uganda and magazines like Musizi to survive.

In two years, he had made friends with many taxi drivers and conductors. He then decided to try his hand at being a taxi tout, to supplement his newspaper business income.

According to the Daily Monitor, Mutebi got to know many people who were working in Kikuubo. After a fortnight, he got space and opened a shop there. He sold cigarettes, sugar, Kimbo, powdered milk, salt, and margarine.

Then came the 1984 to 1986 insurgency which saw much of their merchandise looted and majority of the businessmen ran bankrupt.

One morning on August 16, 1986, Mutebi decided to attend one gospel crusade. He did more than listen to the music and decided to get saved.

He joined the lunch hour fellowship in Kikuubo to stick to his new values. Around the same time, he felt led to serve God.

He then joined Bible College at Namirembe Christian Fellowship. During his second year, the then pastor asked him, to go to Entebbe and lead the Christian fellowship which had not been doing well.

It was a small family of about five adults and a few children. They used to meet at a house that is now present day Entebbe Leisure Park. The fellowship grew bigger, they had to look for space and construct a small papyrus structure that evolved into Entebbe Miracle Centre Cathedral.

News Agencies contributed to this report.