WHEN DID IT BECOME OKAY? 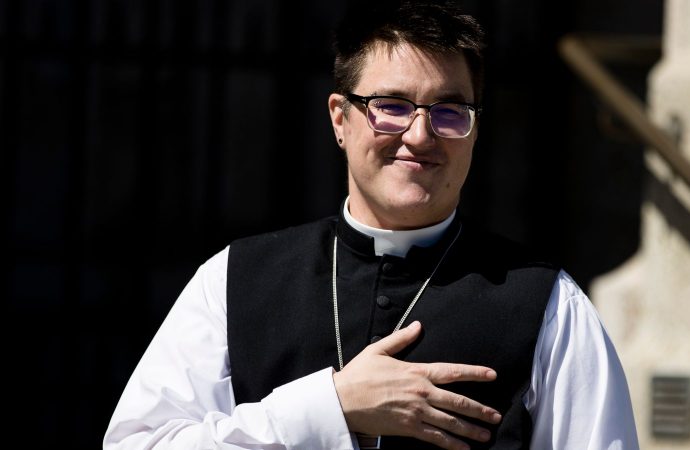 Below is an absurd photograph of ordination. Ordination of Lutheran Bishop, Rev. Megan Rohrer – Transgender and gay pastor, the first openly transgender bishop. The bishop was one of the seven LGBTQ pastors accepted by the progressive Evangelical Lutheran Church in 2010 after it first allowed ordination of pastors in same sex relationships. Franklin Graham

Below is an absurd photograph of ordination. Ordination of Lutheran Bishop, Rev. Megan Rohrer – Transgender and gay pastor, the first openly transgender bishop.

The bishop was one of the seven LGBTQ pastors accepted by the progressive Evangelical Lutheran Church in 2010 after it first allowed ordination of pastors in same sex relationships.

Franklin Graham on Facebook lamented ” It grieves me to see any church taking steps that are against the teachings of the word of God.” 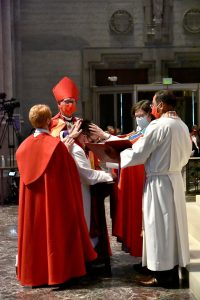 The bishop previously served as a pastor in san Francisco and a chaplain coordinator for the city’s police department. He was then elected in may to serve a six year term with sierra pacific synod after its current bishop announced retirement.

When the bishop is addressed;  gender inclusive pronouns as, him or her/ his or hers/ she or he are hidden in dull curtains as the above is addressed as’ they’ or ‘them’ to mean both sexes are attributed to one human being.

Even as I write, I am not sure what sex the bishop belongs truly to as sources show a shift from one to another over the years that I am limited in the knowledge of the image she was created in.

There are many Christians, out there who can not assuredly speak on the most obvious subjects like being LGBTQ – “Lesbian, gay, bisexual and transgender.” The Q can stand for “questioning” in the sense that one is still exploring their sexuality or “queer,” or sometimes both.

Even as I put up this definition and defense for the acronym, my heart pains and I am in confusion. Confused not because I don’t know what to believe but with the question of, “are you kidding me?”. How do you explain to me that one is still figuring out their sex and or sexuality? That sounds like one holding fish in their hand and then claim, “oh , it is a cock, or suggest, “I am not yet sure if it is a fish or a cock”, those are very distinct items and even one who does not know their different names will objectively suggest, “these are different.”

The church is an altar, altars have fire, they burn and refine.  I wonder , how many churches have become so cold today that, there is no fire burning hence no refining happening that we have become a dwelling place for immorality, a place where sin can hide and be safe. No, not Grace, because that would call men to true repentance yet alas, the one we practice only draws us to more sin. God forgive the church!

The church, objectively speaking has condoned more sin than the world has, so to speak because we are light, there shouldn’t be a speck of darkness. We extend grace and not compromise, we are a standard that should keep going from glory to glory and nothing less than that.

So God created man in his own image, in the image of God he created him; male and female he created them{GENESIS. 1:27}

Since when did it become okay to be confused about the most obvious things like whether one is male or female? As a church, shouldn’t we be explaining this to the world instead of being the conduits of its growth in the misconception of pure words as love and grace?

“Claiming to be wise, they became fools, and exchanged the glory of the immortal God for images resembling mortal man and birds and animals and creeping things. Therefore God gave them up in the lusts of their hearts to impurity, to the dishonoring of their bodies among themselves, because they exchanged the truth about God for a lie and worshiped and served the creature rather than the Creator, who is blessed forever! Amen” (ROMANS 1:22-26).

Need I say more?, There it is – true understanding of grace, should draw us to repentance and not condoning sin or continuing in it. God defines sin not us and if He defines lusts of the flesh as such, then so it is.

“According to their deeds, accordingly He will repay,
Fury to His adversaries,
Recompense to His enemies;
The coastlands He will fully repay.
So shall they fear
The name of the Lord from the west,
And His glory from the rising of the sun;
When the enemy comes in like a flood,
The Spirit of the Lord will lift up a standard against him.” (ISAIAH 59:18-19)

And that is the confidence of the saints. The Spirit of the Lord has a standard raised against every work of the enemy and that’s where we aught to dwell. The world should want to be like us, not us like them! Their fire destroys(lusts of the flesh), ours refines(spirit of God)