‘Christ saved us from a homosexual lifestyle’ 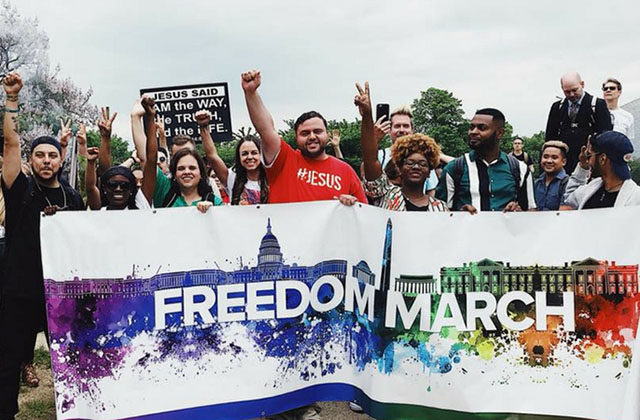 By Agencies Ex-homosexual and ex-transgender men and women from around the United States descended upon the nation’s Capital this weekend for the Second Annual ‘Freedom March’ where they proclaimed the freedom they’ve found in abandoning homosexual and transgender practices for Christ Jesus. “Look at this!  This is Amazing!  They say we don’t exist!” declared author

Ex-homosexual and ex-transgender men and women from around the United States descended upon the nation’s Capital this weekend for the Second Annual ‘Freedom March’ where they proclaimed the freedom they’ve found in abandoning homosexual and transgender practices for Christ Jesus.

“Look at this!  This is Amazing!  They say we don’t exist!” declared author and documentary producer M.J. Nixon, a March co-founder, as many gathered for a group picture.

About 200 participated this year—a threefold increase over last year, according to Life Site News.

Former transwoman Jeffrey McCall kicked off the rally on the grounds of the Washington Monument, explaining that nobody here was forced to change; “It was the power of the Holy Spirit and the grace of Jesus Christ that fell on all of us.”

One testimony after another from the racially diverse group of mostly millennials spoke about their personal conversion to Jesus and the freedom they have found from lives dominated by active homosexuality or gender dysphoria.

Our identity is not in our sexuality; it is in Jesus Christ

“As I lay on the ground shot multiple times —couldn’t move— I said to the Lord, ‘I am not leaving this building dead tonight,’” recounted Colon.

“You promised me I have a purpose in life.  You promised my Mom that the baby inside of her womb was special and [You] had a purpose for his life,” he said. “I am not leaving here dead, Lord; I am leaving here alive and when I do, I am going to worship you for the rest of my life.”

Colon has kept his promise to God, traveling the world preaching about the freedom he has found in Jesus Christ.

“That promise was not easy at all, but look at today,” said Colon.  “Look at all these overcomers here, celebrating that there is change in Jesus Christ.”

Colon explained that the true meaning of deliverance and freedom is being able to look at temptation in the eye and say, “I don’t want you, I want Jesus.”

“That’s how you know you are free,” he added.  “Our identity is not in our sexuality; it is in Jesus Christ.”

A second Pulse Nightclub survivor, Luis Ruiz, said that like many of the people participating in the March the reason why he was there is ultimately because he had a “mother and a father that never compromised the Gospel.”

“They prayed and prayed and believed not in my situation, but in my destiny, my identity found in Christ Jesus.”

“We were all born into sin, baby,” continued Ruiz.  “Even though I might be tempted every day, I choose Jesus.”

“I thank God for this Freedom March.  I thank God for what he is doing in our nation’s capital.  As a combat veteran of fifteen years in the United States Army, today I go to war with you guys,” said Ruiz pointing to the crowd.

“This is a new day, baby,” he exclaimed.

After the rally, the group marched around the Washington Monument, across the Constitution Avenue to the Ellipse, and back, chanting, “The Lion of the God of Judah is roaring, he’s roaring, to set the captives free.”