A CEHURD( Center for Health, Human Rights and Development)Investigation In Partnership With Gugudde Tv. 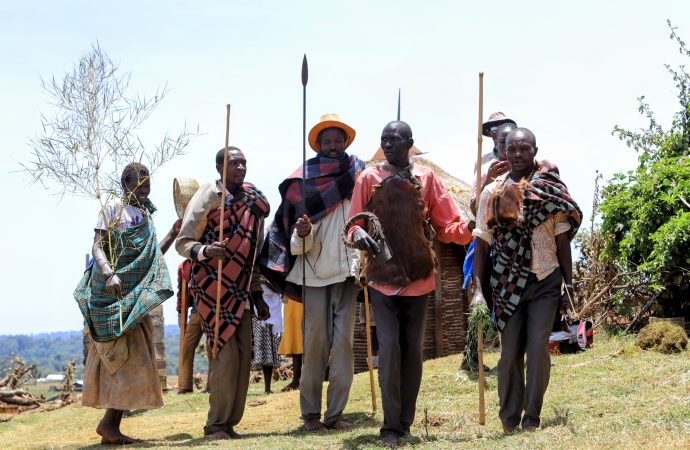 BY NAMALE AGNES. Labor In The Displaced Communities. Will Uganda realize the UN’s sustainable goal 3? According to the latest estimates released by the United Nations Inter-Agency Group for Child Mortality Estimation (UN IGME). An estimated 5 million children died before their fifth birthday and another 2.1 million children and youth aged between 5–24 years

Labor In The Displaced Communities.

According to the latest estimates released by the United Nations Inter-Agency Group for Child
Mortality Estimation (UN IGME). An estimated 5 million children died before their fifth
birthday and another 2.1 million children and youth aged between 5–24 years lost their lives in
2021.

In a separate report also released on the 10th January, 2023, the group found that 1.9 million
babies were stillborn during the same period. Tragically, many of these deaths could have been
prevented with equitable access and high-quality maternal, newborn, child and adolescent health
care.

It is predicted that over 54 countries will fall short of meeting the Sustainable Development
Goals target for under-five mortality. If swift action is not taken to improve health services, and
warn the agencies, almost 59 million children and youth will die before 2030, and nearly 16
million babies will be lost to stillbirth.
Children and women continue to face wildly differentiating chances of survival based on where
they are born, with sub-Saharan Africa and Southern Asia shouldering the heaviest burden, the
reports show.

Statistics show that over 5700 women lose their lives in labor in Uganda, and that’s according to
documented data, but how about those whose stories are not told? Are there people, still
marginalized basing on their historical background, gender, or geographical location?
According to Hon. Abudhil Fadhil, the MP, Kween district, in an exclusive interview we
managed to hold with him, he emphasizes, the presence of health facilities in the region he
represents (Kween district) even though, we could not take his words for gospel truth.
As a travel journalist, you already know being on the road is what takes up most of my time.
However, my trip to the Sebei region, hiking the Elgon hills to visit the Ndorobos did not leave
me the same. I witnessed how geographical location and unfavorable government policies can
affect ones right to access to sexual and reproductive health rights.
The Ndorobo’s often referred to as The Mosopishek /Benet are a tribe living in the upper slopes
of MT Elgon in the current Sebei sub-region in the districts of Kapchorwa, Kween and Bukwo.

According to Walter Gold Schmitt, The Mosopishek are believed to have lived in the upper
slopes of Mt Elgon since time immemorial, dating back to 1450 BC or beyond.
Their number currently is estimated to be 8,500 people.
They are among the tribes which form up the bigger cluster known as the Kalenjin who spread
all over east Africa. The Mosopishek used to live in the upper slopes of Mt. Elgon on the Eastern
part of Uganda.

The Mosopishek are part of the tribes who form up the Sabot group around Mt. Elgon.
Among these; The Mosopishek and The Sabin’s are the only tribes living in Uganda around Mt.
Elgon.
The Mosopishek were pastoralists, hunters, fruit gatherers and bee-keepers. The women used
to weave baskets made from bam boo stems.

During my short-lived stay in the Ndorobo community of yatui parish in kwosir sub county of
Kween district. My heart sunk at the deplorable livelihoods encountered by these incredibly
hardworking people. To say the roads to these communities are bad, would be an understatement
for we literally had to hike there on foot, not because we did not have a car, but because our car
could not maneuver the rough terrain. People here use donkeys to carry their produce up and
down the hills every other harvest.

According to the recently amended constitution of Uganda, the affirmative action, broadly
states that,

“Notwithstanding anything in this constitution, the state shall take affirmative action in favor
of groups marginalized on the basis of gender, age, disability or any-other reason created by
history, tradition, or custom, for the purpose of redressing imbalances which exist against
them!”

This brings us to the burning questions that set me packing my bags back to this marginalized
community living on the slopes of mountain Elgon.

– Why are these people in the mountains in the first place? –

– Why don’t they have roads?
– What do they do in case they want to access basic human needs?
– According to the affirmative action, it’s their right to have their needs addressed by the
state, but have they tried getting help?
– -And most importantly, how do women here access maternity care in a place as isolated
as this?

Every- waking day a typical Ndorobo is going to be spotted wrapped in a blanket. It’s not
fashion, neither is it swag but rather the inescapable fate caused by the weather conditions here!

We made our way to a one David Monday, a member in the Ndorobo community, through the
hilly landscape of the Elgon Mountain. After a considerably warm welcome, David narrated to
us the nemesis of his people.

According to David Monday, the Ndorobos are a stateless community who lack the basic right to
a representative in the parliament of Uganda.

“When government got an interest to take over the forest for conservation reasons, we were
relocated to the current resettlement area, that in kween district, we are occupying five sub
counties, Tuyigad, Kwosir, kituoi, Bennet, Kaseko and…… we are also a stateless community,
we are under privileged, we don’t have our own political leaders, who can represent our views
at national level, say in parliament, so marginalization is a story here. Marginalization in
terms of social services, schools, health services, road infrastructure, we are completely left
out.”

David’s’ wife however, an expectant mother in the Ndorobo community, Other than tilling the
hilly landscapes to plant Irish, she intends to her home relentlessly. Afetr our heart wrenching
conversation with her husband, she managed to narrate to us her side of the story.

“My name is Yeko masyline, a resident of Sabu Village, Yatui parish, Kwosir sub county of
kween district. I am a mother of three, and also an expectant mother, 6 months into the
pregnancy. Some of the challenges I face during this time include long distance to the health
Centre and sometimes there are no doctors there! Some of the traditional birth attendants here
are not experienced and at times are not willing, some local medicine makes me vomit. We
need the government to support us by constructing health services near us in the Ndorobo
community. We need good roads leading to the healthy centers. Our birth attendants should
also be supported with gloves to help women in labor and training. The government should
also think of educating the community.” She said.

We set off to the home of the traditional birth attendant where David’s’ wife usually gets
emergency care for her un-born child. Under a scotching sun but we could not help but shiver
given the coldness in this area.

The traditional birth attendant seemed rather un easy, it seemed like there was a woman in labor
in her hut, after her consent we go in with her to witness the process.

The old woman, smeared soap on her hands and massaged the young mothers belly as she fed
her raw herbs. After the young mother was properly tended to, we extend our chat with elder
Kokop Annet outside her house.

“My name is Kokop Annet, an old woman and also a birth attendant in the Ndorobo community.
I started doing this in the year 1970 until now. The medicine you saw me give to the young lady
in there is to help he body get prepared for labor, it’s called Chepjaboyet. I have helped many
women give birth, but I have also watched many lose their lives doing so, so many I can’t recall
the number!”

According to the information we had gathered by then;

– Actually the Ndorobo’s filed a court case against the government and emerged winners.
– There is no tangible infrastructural compensation on parish level.

– a considerable non documented number of women have lost their lives giving birth
here!
– The nearest healthy facility is 8-14km away!

So, we set out again under a scotching sun to visit the nearest healthy facility, Terempoy Healthy
center III

On the walls, hang chats on which numbers of health personnel were written but no one was
available to attend to the lucky expectant mother who made it to the hospital. The labor wards
seemed more like deserted rooms left to the mercy of kind passer by-ers .

We insisted on seeing someone responsible and the guard calls the volunteers who apparently
work in the absence of assigned medical personnel. According to him, the hospital lacked
enough equipment to cater for the whole region it serves and lacked emergency care in case an
expectant mother developed complications during delivery.

After our chat with the volunteer medical personnel, we were driven back to the burning
questions of:

– Why are there no medical personnel in the only available healthy facility?
– Who is responsible for implementing these services in this region?
– Why is this hospital serving such a huge amount of people?
– What do women here do in case of emergencies
– Why aren’t their health facilities on parish level?
– Where does the tax money paid by these people go to if they can’t access their basic
needs?

We decided to follow the only clue we had at the moment, if the Ndorobos sued the government
and worn the case, why weren’t they compensated with infrastructure, that they are entitled to?

According to council James Nangwaala, the legal representative for the Bennet’s, in 2005, when
the Ndorobo’s filled a court case against the government, the attorney general was supposed to
undertake affirmative action in favor of that community, to redress the imbalances against them,
however he refused to comment on whether this was actually put in place.

The District Health Officer Dr. Wangubo Ayub, says the funds availed by the government at the
district level are not enough to serve this part of the country and the geographical terrain of this
region makes it hard for them to deliver services to the communities, however he points out that
Terempoy health center III has been facing internal conflicts.

The Uganda wildlife authority through the public relations officer Mr. Hangi Bashir says, they
are not responsible for compensating people, their role is to take over any place that is declared a
wildlife reserve and that’s what they did with the Bennet’s, however they direct me to the office
of the prime minister.

Mr. Julius Mucunguzi, the public relations officer for the office of the prime minister, says, there
is no deliberate plan to deny these people basic needs, but the funds are not available to do so.

This left us wondering Uganda’s ’position when it comes to realizing the UNs’ sustainable
development goal 3 on Good Heath and Well Being for All.