Uganda’s battles can only be won through prayer – First Lady 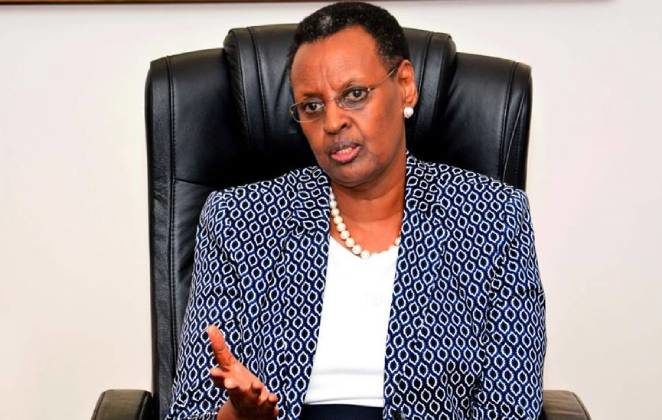 By Janet Kataaha Museveni The Bible informs us that ancient Egypt was the political and economic powerhouse of its day. The Pharaoh who was king had unrivaled influence and power over the known world. The Children of Israel who came to Egypt first as guests or refugees of famine, soon had a reversal of fortunes

The Bible informs us that ancient Egypt was the political and economic powerhouse of its day. The Pharaoh who was king had unrivaled influence and power over the known world. The Children of Israel who came to Egypt first as guests or refugees of famine, soon had a reversal of fortunes and became the slaves of Egypt for 400 years.

Amazingly as Providence would have it Moses, who was the son of Hebrew slaves, was adopted by Pharaoh’s sister and raised as a prince of Egypt. He received the best education in the Arts, Sciences, Architecture and Warfare. As a young person, I loved the movie adaptation of this story called, “The Ten Commandments” starring Charlton Heston as Moses and Yul Brynner as the Pharaoh Rameses.

In the film, the grandeur and splendor of ancient Egypt is captured in its architecture, science, war machinery and wealth. The only mischaracterization in the film is the casting of the Egyptians as Europeans whereas it is clear from the drawings inside the pyramids, that the original Egyptians were black Africans.

In addition, in 2 Chronicles 8:11, the Bible tells of how Solomon built a palace for his wife, the daughter of Pharaoh, yet he didn’t accord this honor to his other wives or concubines. The Bible also tells the story of the queen of Sheba or Ethiopia who visited King Solomon and gave gifts of gold, precious stones and spices. 2Chron.9:1

All these accounts show that the Africa of antiquity was not only prosperous and wealthy but more so a political and global hegemon.

The question, that I have pondered many times over the years is,”What happened to Africa?”

Africa committed the grave sin of enslaving the children of Israel for 400 years, which returned to haunt the African continent with the advent of the evil trans-Atlantic slave trade. This year 2019, marks the 400th anniversary of the first African slaves arriving in America and the ensuing exploitation of African people. This anniversary is a watershed moment in our history and a time for prayer, reflection and firm resolution as we look to the future

The strongest and brightest Africans were carried to America to serve as cheap labour to build the economies of the western hemisphere. It was African youth and strength that fuelled the Industrial revolution and once it was underway, the Europeans returned to the African continent in search of raw materials and the scramble and carving up of Africa followed. The age of colonialism meant that Africa became a spectator to global and even their own local affairs. African communities were disconnected from each other and from their land. They were forced to grow cash crops that had no linkage to the local needs of the community and only served to strengthen the disenfranchisement of local communities and tie them in dependence to Europe.

Africans were deemed unable to take care of their own affairs and thus began the culture of being told what to do for ourselves. For it is in Africa, that other people tell you what is apparently in your own best interest as though you are incapable of making that decision on your own. I am not one of those who believe that Africa’s problems are all in the past, but I do think it is important for us to understand where we went wrong in order to not repeat history.

My heart’s cry is also going out to parents who are praying for the soul of our country and the future of our children. Parents who understand that the battle we are facing will be won on our knees in prayer. It will not be won through money or donors, it can only be won by sustained and prevailing prayer.

I believe that God has been waiting for Africans to awaken from deep slumber and realize that our greatest obstacles are internal rather than external. Our weaknesses are our own petty and selfish differences. The magnifying of small differences and totally obscuring the many ties that bind us and our historical, cultural and spiritual interests. All that is sacrificed on the altar of personal ambition and ego and the thirst for unjust gain. My prayer is that in this time, Uganda will break out of that vicious cycle and choose another path, the path of doing good, to build our nation by being and doing the best.

Many times, I have felt deep frustration as I wonder what unique solutions or innovations does Africa bring to the world? Do we feel compelled to do what others have not done in order to bring to the table a perspective that is uniquely African and thus take our place among the nations.

Even in the area of agriculture, where we have a comparative advantage and could outgrow and out produce anyone in the world, even there we have not fully harnessed our natural resources and still depend on the rains to grow our crops. Our national parks and natural beauty and wildlife is God given, but have we been good stewards to use these resources to their maximum potential for the good of our communities?

I was quite challenged to learn that when China decided to modernize their economic policies to become a mixed economy, they asked their population to make a nominal contribution to raise the money for this work. Every citizen paid a nominal fee of say 1/- in order to support and start up this work and raise the capital to fund their own programs. The principle here is self-reliance and community ownership of their work and responsibilities as citizens.

The Chinese probably knew that they had few true friends who had their long-term interests for stability and development at heart. So instead of looking outward, they looked inward to their own people. They didn’t wait for “Development Partners” as we often do in Africa, rather they succeeded by building their internal capacity and studied other world systems picking what worked and discarding what didn’t work for them.

There is a story I like to share with women in the country whenever I have an opportunity to do so. I visited Bangladesh many years ago and learned of the story of how a wealthy philanthropist saw an opportunity to help women become self-reliant contributors to their society. This Bangladesh philanthropist knew the power of investing in women and made an initial contribution to a SACCO for rural women. He knew that the rural woman was one of the most marginalized and overlooked members of the society and yet they formed the foundation or bedrock of family and thus national life. So he worked hard to gain their trust and convinced them to begin to take small loans to improve their lives. These women who started out as being very intimidated and scared of taking loans knowing that they could never pay them back, soon became more confident and started prospering. The philanthropist helped the women to form large working groups and as the women borrowed more money and worked hard to pay this money back, the fruits of transformation started to show. They sent their children to school, they built decent homes for their families and their lives changed for the better.

Soon after that, the World Bank came knocking on their door, they had noticed the success of their SACCO and now wanted to invest more money with them and perhaps help them run their banks. The Bangladeshi women considered this offer, but their answer was ultimately, ”thanks but no thanks.” They responded to the officials saying when they were in dire poverty and the banks had this money all the while and never came to help them. Now that they had their own money they did not need anybody’s help!”

That story absolutely uplifts my spirit because it reinforces my belief that real transformation does not come from big International Organizations but rather from simple personal decisions made by ordinary people. Therefore, my prayer for Ugandan families, mothers and fathers, men and women who are working hard to build their families one day at a time is that God will help us to raise children who will become serious, responsible and productive citizens that seek to make a positive contribution to their society. Children who will strive to build their schools, Technical Colleges and Universities, leaving a positive legacy behind instead of strikes and riots that only destroy what has already been built. These children can only come from stable homes built on a solid foundation of prayer.

Recently I was happy to launch the work of a local charity called Hill City Foundation. This organization gives scholarships to bright and deserving students whose families are not able to meet the cost of tuition. In addition, the organization gives mentorship and seed money to young graduates to help guide them as they begin their journey into the workforce. I was so overjoyed as I launched this foundation because it was a sign to me that finally the tide is beginning to turn and Africans are maturing and understanding the barriers to our blessings. If we as Ugandans can heed the commandment to” Love your neighbor as yourself,” we will be able to be a blessing to others & God will in turn bless us.

However, if we continually refuse to bless others we will remain as we are, or worse be diminished. If we are profiting from unjust gain, then we are heaping problems and curses on ourselves and our families. Can you imagine a home that is built with embezzled government funds earmarked for establishing a community school or hospital? You have denied that community a basic need and put your personal needs above those of others. You may succeed in hiding your wrongdoing and may even be well regarded by friends and colleagues who share your mindset, but ultimately we have one Judge who sees and knows all and nothing is hidden from His sight. He is the One who blesses or withholds blessing and therefore we should not delude ourselves. We must raise our children to know they have a responsibility to their family, community and their nation.

Finally, we all need to be reminded that it is God who created Africa and Uganda for a purpose. He lovingly made everything beautiful for His children to enjoy. And I believe He has been waiting for us to choose to become the people that will work hard to develop this beautiful land for the glory of His Name and the good of His people. It is not an easy task by any means, but it is possible. The Bible says we “will live by the sweat of our brow” and that is what we are called to do as far as our country is concerned. But if we pray, He will guide us as He always has and if we are obedient to Him, He will multiply and bless the work of our hands so that poverty and insufficiency will become a thing of the past.

May God bless you!