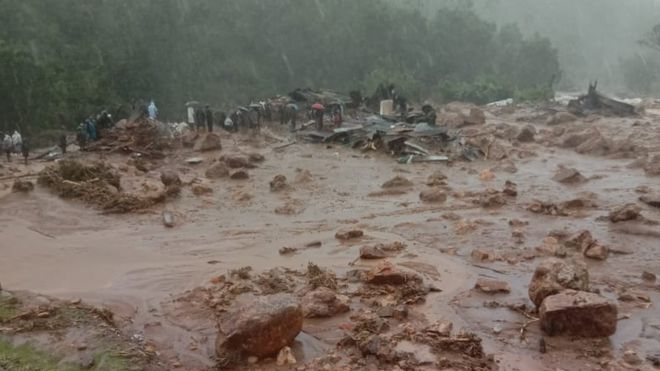 At least 15 people have been killed after monsoon-season floods triggered a landslide in the southern Indian state of Kerala, officials say.
Officials say dozens remain trapped under debris, with the death toll expected to rise

At least 15 people have been killed after monsoon-season floods triggered a landslide in the southern Indian state of Kerala, officials say.

Houses in Idukki district were swept away after torrential rain and flooding late on Friday night.

The India Meteorological Department (IMD) had issued a red alert for Idukki on Friday, forecasting extremely heavy rainfall of more than 20cm (8in).

The landslide happened at a settlement for tea workers in the Rajamalai area, around 25km (15 miles) from the tourist town of Munnar.

Local reports say as many as 20 houses of tea-plantation workers and their families were buried under the debris.

Rescue efforts are ongoing, but operations were being hampered by heavy downpours, foggy conditions and the fear of more landslides.

Pinarayi Vijayan, the chief minister of Kerala, said the National Disaster Response Force (NDRF) would soon join the rescue workers who were struggling to find bodies.

The site had been been completely cut off after a bridge connecting to the area collapsed amid the flooding.

But the bridge has now been restored and more rescue workers, including local police and firefighters, are on their way.

“So far, 15 bodies have been recovered, and 56 are missing,” Dean Kuriakose, the lawmaker representing the region, told the BBC from the scene.

“Rescue workers had earlier shifted seven people hurt in the landslides to the hospital. We fear 56 others trapped under the debris are dead.”

The tragedy occurred on the first anniversary of the landslides in Malappuram and Wayanad districts that claimed more than 50 lives during the 2019 floods.

Kerala also witnessed severe floods in August 2018, during which thousands of homes were swept away and more than 400 people were killed.

More heavy rainfall is expected in southern and eastern India this weekend. The IMD said a low pressure system was brewing over the Bay of Bengal, as the country’s monsoon season reaches its peak.

The monsoon season lasts from June to September and wreaks havoc across South Asia every year.

Several parts of another southern Indian state, Karnataka, have also been affected by heavy rainfall and landslides.